You are here: Home / New Books / Impact Zone: Be Strong. Be Fearless. Be Brave. 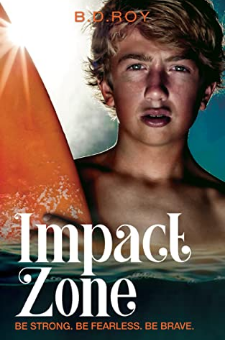 About Impact Zone: Be Strong. Be Fearless. Be Brave.:

Fifteen-year-old Jack McHale has an idyllic life. He surfs daily off Newport Beach, where he lives in a comfortable home with his career-driven parents and his two brothers.

A dreamer and a writer, it’s their shared passion for music that draws Jack closest to his father. In ’89, when his parents split up, it’s Jack who’s hit hardest. How could his father abandon them like this? Jack’s a talented surfer. It’s his escape. He’s not interested in competing at a high level like his two brothers. But when Jack ignores his absent father’s safety instructions, and a solo surfing expedition goes dangerously wrong, Jack discovers just how unshakeable his bond with his brothers will always be.

Invited to spend the summer at Paradise Beach, where his father now resides, Jack must confront his anger at his father and his despair over his family breakdown. But Cass Garcia soon pulls his heart in a new direction, sparking the embers of first love. A rebellious surfer girl, Jack admires her adventurous spirit, but her risk-taking leads him more than once into dangerous situations. It’s one thing to be brave and fearless; but courage and smarts have to go together.

While Jack and his brothers are dealing with the resentment toward their parents, and navigating a new relationship with them, they must also confront a local gang leader, a bully determined to keep them off the local’s end of the beach.

Faced with a life-or-death decision, will Jack choose personal accolades or discover that a moral triumph brings its own rewards?

Check out the book trailer at https://www.youtube.com/watch?v=gphDn_FKxWM

The author B.D. Roy lives in a small coastal town. When he is not on the computer writing, reading or being with family, he spends time immersed in the outdoors, especially in or near water. He has an appetite for history and has travelled widely to learn more about people and their cultures. He enjoys portrait and street photography and is intrigued by the people he meets and their stories. These and other stories inspired him to write Impact Zone.