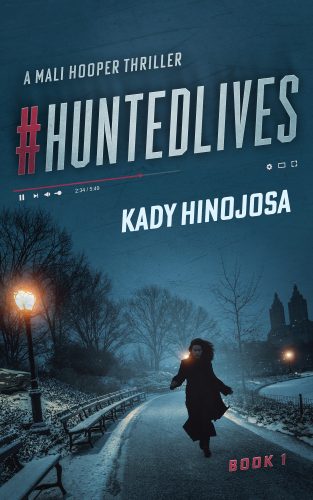 She’s out to prove herself, and believes two seemingly unrelated murders are tied to a serial killer. He believes her analysis was responsible for his friend’s death. Can these two FBI agents work together and find the killer?

Two murders, an undercover agent and a housewife.
Different cities, different weapons.
Related only by a medically-precise cut behind the ear and a calling card on the chest of each victim.

And the killing has only just begun.

FBI Tactical Intelligence Analyst Mali Hooper delves into the case with Special Agent Jacob Black and, as the murders stack up with the same M.O., they make the chilling discovery that each murder is broadcast on social media. The public loves it and clamors for more!

When they discover the true reason behind the carnage, Mali begins to question her faith in humankind. That faith is put to the ultimate test. . .because the hunter now becomes the hunted.

BUY #HuntedLives now, just $0.99, and don’t miss the pulse-pounding action that will have you on the edge-of-your-seat from start to finish. Take advantage of this sale before the explosive conclusion of the trilogy, #DanceFever, launches in early September.

Born and raised in California, Kady Hinojosa always loved creative writing. However, she took a logic track in college and studied Computer Science. She met her husband, Jose (an Army Aviator), in Washington DC while on active duty in the Navy. After many years of travel, they now live in the Texas Hill Country near kids and grandkids.

The bulk of her career was spent working as a Business Analyst/Quality Assurance expert for financial, and other, websites. After retiring, she returned to her love of writing and wove her IT experience into her novels, #HuntedLives, #JusticePrevails, and the soon-to-be-released #DanceFever.

Kady enjoys exploring topics that concern her, and writing about them in a way that captures the readers’ attention in an entertaining manner.

To learn more about her, visit her online at www.kadyhinojosa.com.