You are here: Home / Featured Books / Her Empire: Mafia Made 2 by E.M. Shue 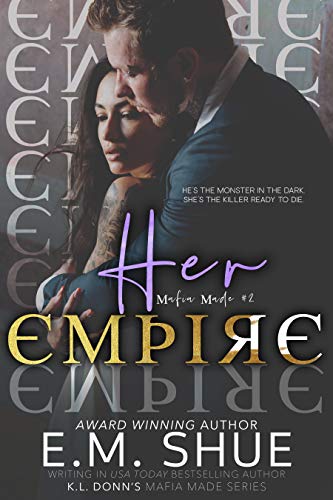 Her Empire: Mafia Made 2 by E.M. Shue

Anatonia is a killer. Until Vitaly comes for her. Now she will protect the hitman.

Anatonia is the head bodyguard for the Morello Mafia. She will kill anyone that comes close to Posy for Natale Morello. It’s what she was raised to do.

She’s one of the deadliest hitmen to come out of MI6, KGB and even survived special forces Marine training at a young age. But few know she is the niece to the head of the deadly Bocharov Russian family. That he raised her to destroy the Morello’s.

Because she defied him, he’s sent his best killer to kill her.

Vitaly is the monster in the dark.

He’s the one the Bocharov family sends to end their enemies. He thinks he’s only been sent to kill a rival family’s enforcer. What he doesn’t know is she is the illegitimate niece to his boss and now the woman he will do anything for.

Even defy the family he’s bled for. He’ll protect her and help her conquer her enemies.

The Bocharov Family has declared war against Anatonia, and she will end them.

Can Vitaly hold the woman he was born to protect? Will Anatonia still be standing when the blood of an Empire is destroyed?

Will they kill the Empire she was meant to lead?

Author Bio:
Writer, wife, mother of three girls, doggie mom to one, and doggie grandma to four. This multi-published award-winning author likes her whiskey Irish, her chocolate dark and her hockey hard hitting. She’s an avid reader and you can find her Kindle packed full of all sub-genres of romance. When she isn’t writing action-adventure, suspense, and strong woman she’s spending time with her family exploring Alaska.

She’s currently writing several series and standalones in multiple sud-genres of romance all are hot & steamy and action-packed.

Three of her books have won the Colorado RWA Beverley contest, Sniper’s Kiss in 2018 for Suspense, Angel’s Kiss in 2019 for Contemporary, and Accidentally Noah in 2020 for Suspense, while many others were finalists in this same contest.

E.M.’s favorite saying is don’t piss her off she’ll write you into a book and kill you off in a new and gory way.

Join Cocktails & Friends to be kept up to date on all her new releases and appearances.