You are here: Home / Featured Books / Grayer than Grey — A love story. A guy, a girl and his demons by Bob Keaton 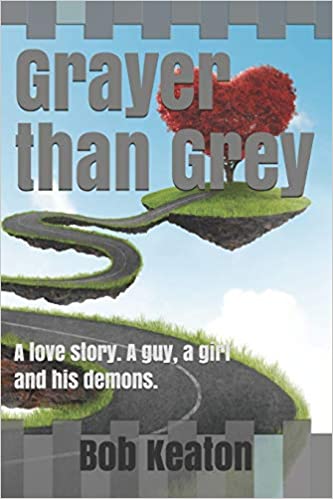 Grayer than Grey — A love story. A guy, a girl and his demons by Bob Keaton

Haunted by his past and what he has to do to control the demons it causes, Scott never lets anyone get close. What if they found out about the fire and what his cousins did afterward? He’s never been in love. Never even spent the night with a girl after having sex. Then he meets Abby, and it’s like she casts a spell over him. A spell he can’t break, and maybe doesn’t want to. To buy time to decide, he takes a job in another state as an entertainment writer for a newspaper. Despite all the fun and excitement of the new job, which has him interviewing celebrities and jetting off to New York and Hollywood, he can’t stop thinking about Abby. They continue their long-distance affair while she is finishing grad school, and Scott weighs the options of how to handle the new feelings he’s experiencing. Can he conquer his demons and have a successful relationship with Abby? Does he want to try? It won’t be easy. And will Abby wait for him while he tries?

He graduated from the University of South Carolina where he studied English and journalism and was already working for a daily newspaper as legislative reporter covering politics at the state capitol during his junior year.

After graduation, he was hired to cover entertainment for The Columbia Record. Five years later, he started covering that beat for The Fort Lauderdale News.

During those years of covering entertainment (movies, plays, nightclubs, television, media personalities), he gained considerable insight into that field, but eventually gave it up to move to San Francisco.

From there his career turned to medical writing and then covering the construction industry when he moved to Atlanta.

Over the years he has had countless articles published in newspapers, magazines, and association and trade publications.

Once he retired, he turned to creative writing. Grayer than Grey is his third novel to be published. A fourth is in the final editing stages and a fifth is already being planned.