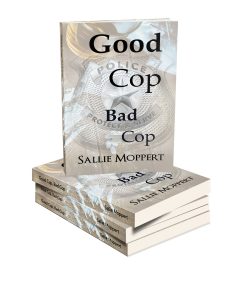 When his mother is beaten to death by his alcoholic stepfather, fourteen-year-old Samuel Marlowe is rescued from seeking revenge against him by a chance meeting with Officer Edwin Hill. The veteran policeman takes Sam under his wing and even becomes the boy’s foster father.

Sam becomes a cop and works alongside his beloved mentor until Edwin is killed in a shooting. Hailed as a hero for his actions in the case, Sam feels like anything but. He begins a dark descent away from the stand-up policeman he once was, turning to drugs and alcohol to numb his pain and his PTSD.

The police captain assigns Sam a partner hoping to salvage what is left of him by forcing him to become a good role model for the young recruit. Needless to say, Sam is not pleased with the arrangement, protesting it up until the moment Junior Detective Dahlia Bennett enters his life.

Will he try to shake her loose? Does her by-the-book ideals and strong moral code rub off on him? Will his relaxed attitude and views on true justice start to influence her? What will ultimately lead to the two becoming a solid team? When Dahlia declares she wants to reopen some cases believing that the wrong person was sent to prison, Sam tells her straight out that in doing so, she would be putting her life at risk. As Dahlia persists, Sam is faced with the ultimate decision: let Dahlia reopen the cases and discover his crimes, or kill her to keep her from learning the truth.

Author Bio:
A New York native, Sallie has a Master’s degree in Criminal Justice, with a Specialization in Forensic Science. A lifelong mystery fan, she has combined her love and passion for writing with her interests in criminal justice, law, and forensic science.

Sallie currently resides in New York with her family and her “zoo”, which consists of two dogs, two guinea pigs, a robo dwarf hamster, a betta fish and a leopard gecko. She currently works in the legal field while writing and reading as much as she can.