You are here: Home / Horror / Gate of Torment 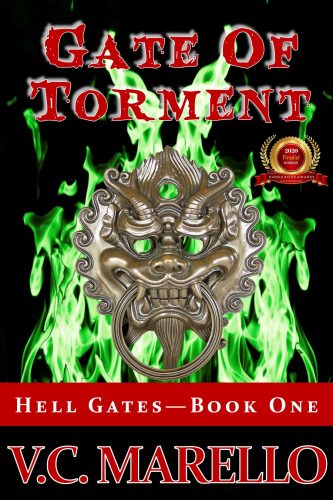 About Gate of Torment:

Through the ages, the knowledge of the Hell Gates faded from human memory, thus their very existence was never captured by the written word. For eternity, the one purpose of the Dragon Guardians was to guard these Gates so that no fallen angel could escape. Time had destroyed the Dragons’ physical form and disintegrated into pure celestial energy. Myths and legends captured only a minuscule ounce of truth about these creatures’ essence. Three souls, knowingly and unknowingly, attempt to free themselves from their own self-imposed prison. One tormented by a pact for love. One tormented by the love for her family and its obligation. One tormented by the love for himself and avoidance to take a risk in his life. Their battle to free themselves depends on whether they choose to open, keep closed, or ignore the Hell Gate. Deep below the heart of San Francisco, concealed under an old grocery store, one of the Hell Gates remained silent since 1906 when, at that time, it opened and the fallen angel, Samael, momentarily escaped; destroying much of the city buildings with an earthquake and fire. Survivors described a fiery fiend moving throughout the city burning all in its path. Most accepted it figuratively, but was it? Over a hundred years later, we will find out the truth. So, in the spirit of any cheesy horror story, WHAT IF Hell, today, went shopping for virgin blood in San Francisco…how hard could that be?

Gate of Torment was selected as a Finalist in the 2020 Kindle Book Awards – Horror category.

What began as a fascination for V.C. Marello while growing up by watching Friday late-night horror and Sci-Fi reruns manifested within him an imagination to create “What If…” scenarios.
Though his career took him into the technology field while raising a family, the “What if…” scenarios continued and transformed into stories. Now, those characters desire to reveal themselves to our world, no longer forgotten souls hidden in the shadows of the celestial plane of existence.