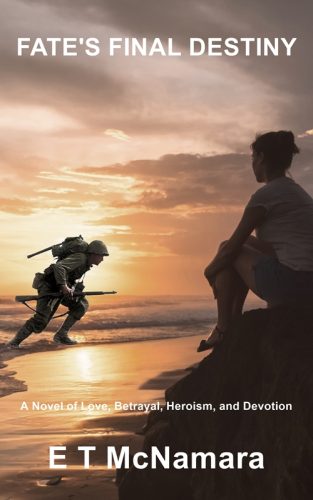 Now free for a limited time, Fate’s Final Destiny is an epic story of two childhood friends who fall in love, only to have fate tear them apart. Set during the Great Depression, the Dust Bowl, and World War II, the story begins in 1945 on the battlefield of Iwo Jima but flashes back to 1930 and life on the Oklahoma Panhandle. Growing up, Cindy and Michael plan for their future, only to be caught up in the tidal wave of world events. Forced to be apart, they find themselves beginning new and separate lives. Never fully understanding the reasons for their separation, yet never giving up hope, they find it difficult to move on. As they and their families are experiencing the life-changing events of Pearl Harbor and the war in the Pacific, these members of the Greatest Generation find themselves swept up by current and future events. As the two star-crossed lovers become entangled in the major events that shaped America’s destiny, readers will be able to go along with them on their journey through one of the most interesting periods of twentieth-century history.

E T McNamara is an award-winning, best-selling Amazon author who began his writing career after retiring from years of serving in the public sector. E T McNamara attended St. John’s University and Rollins College, attaining his degree in economics and doing post-graduate work in financial management. He has always been interested in history and describes himself as a romantic who enjoys a good love story. His other interests include landscape photography, where he has received national recognition for his work. Married with three children and four grandchildren, the author believes writing late in life is advantageous. His varied background includes being a police supervisor, a criminal investigator, a SWAT team member, a supervising court clerk, and the court official in charge of New York City’s night courts. He has served as a United States Marine Corps reservist, a district assistant manager for a major insurance company, and a NASDAQ registered representative. These positions have provided him with real-life experiences to incorporate into his novels. The author enjoys creating a believable story and developing characters with whom his readers can identify. He believes that if the readers feel better after reading the story than before, he will have achieved his objective.