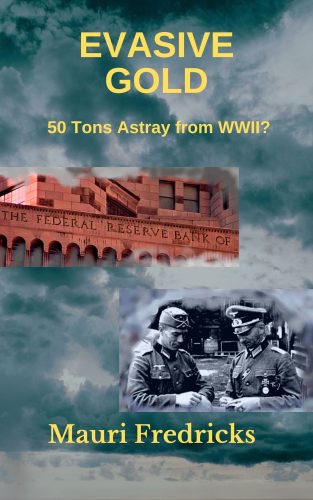 About Evasive Gold by Mauri Fredricks:

Have fifty tons of gold been astray since World War II? But how could that threaten America’s dominant global role? Only if the word gets out. And it has.
When Norway was invaded by Nazi Germany in April, 1940, the National Bank’s 50 tons of gold deposits were smuggled away and brought across the Atlantic to safety. Or maybe not.
Could the hoard still be out there somewhere?
The word has leaked to a group of Neo Nazis who have made their own calculation. Fifty tons of gold is worth more than ten times what Osama bin Laden needed to build up the Al Qaida terrorist network.
Two agents are each given a mission. One in 1940, and one in present-day New York. Evasive Gold follows both men – each in his own period of time – until the final dramatic moment when their two paths converge.

Evasive Gold is both a historical WWII novel and a present-day mystery seeking to reveal the past through a hunt for elusive clues in the present, written and hidden 75-80 years ago.

Mauritz Fredriksen (Mauri Fredricks) was born in Norway, but grew up in the United States, the son of immigrant parents. He attended a number of schools in different parts of the country as his father was moved around by the Fish and Wildlife Service as a captain of a research vessel. The family finally settled in Massachusetts.
He earned an SB degree from MIT in Humanities and Engineering, with a concentration in History and Comparative Literature. During that time, he had also spent a year at the University of Oslo studying Norwegian Literature. He also served a three-year enlistment in the US Army which included a tour in Germany.
Most of his career has been in IT, first in the Boston area and then in Norway after he and his wife Astrid moved back to Oslo. He earned a further history degree (Cand. Mag.) from the University of Oslo, specializing in Economic History. He has also worked several years free-lance as a translator (Norwegian to English).
During the first few years of his retirement, Astrid and he lived aboard their sailboat during the temperate seasons, sailing and exploring the coasts of Scandinavia.