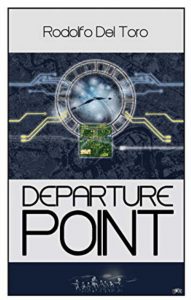 Tom Baker is a technology mogul and wealthy beyond the dreams of avarice, despite all he has, he’s not content. Tom lives tormented by the death of his father, and would gladly give it all up for one more day with him. So for the past twenty years he has worked tirelessly in an attempt to build a time machine. A machine whose only purpose is to go back in time and save his father, but his attempts have come to a stand still. While he tries to overcome the technological hurdles, Tom is faced with another problem. His father died in a covert mission during the first days of the Gulf War, and all information regarding the mission is classified. Now, with a new addition to his secret team, he hopes the technological roadblocks might be overcome, as he tries to find out more about his father’s mission.

On Amazon and it’s lending library. FREE TO DOWNLOAD FEBRUARY 12th and 13th!!!!

Buy the book, and follow the author on social media:
Get This Science Fiction Book From Amazon.

Author Bio:
Rodolfo Del Toro, is a physician with over twenty-years of experience. He has spent most of his professional life in private practice and teaching at Medical Schools, which he finds tremendously rewarding. Outside work he enjoys traveling and spending time with his family. When he can, he steals time to write and feed, what his wife believes, is an unhealthy obsession with old Land Rovers D90 and electric guitars. This is his first book!
You can follow him on Instagram #del_356