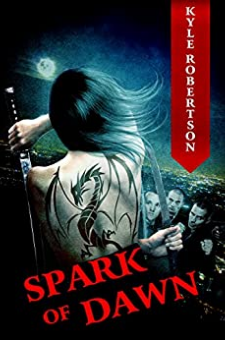 About (Crime Thriller) Spark of Dawn: The Assassin’s Vindication by Kyle Robertson:

HOW DO YOU SAVE YOUR BROTHERS TRICKED INTO KILLING YOU?Yoake Hibana (Dawn’s Spark in English) is a female Yakuza assassin of the Rising Dragon Clan. Her moniker was the Demure Assassin. She was a peak assassin. The only problem with her was she was a ‘her’. Females were mothers, daughters or mistresses in the Yakuza. Being a soldier was unheard of.One day after a certain assassination, she checked the dojo for security and happened upon her leader, the oyabun. She heard what she shouldn’t have.Sensei Tagai, her oyabun was on the phone planning the obliteration of his own clan! All her brothers were targeted for intentional death!Tagai saw her, and tried to kill her. She escaped with her skills and became a fugitive. Tagai yelled to her he would tell her brothers she was the traitor, and to hunt her down to kill her. She had to find a way to warn her brothers while avoiding katanas from the misguided clan. Yoake went through many calamities before she chose her last resort, confiding in a straight police officer. She was different, but help from a cop was sacrilege in a Yakuza clan.Lieutenant Tagawa despised Yakuza, but his public duty was to assist anyone marked for death. She was affiliated with Yakuza, but she was a human Yakuza. He just didn’t know how deep her distress went.Follow the Demure Assassin on her harrowing journey to thwart her chauvinistic oyabun. Trying to stop him from murdering his entire clan gets much deeper than just vindicating for her brothers in Spark of Dawn: The Assassin’s VindicationIn this underworld opposites attract thriller you get:Underworld betrayalUnderworld collusionA non-traditional suspense thrillerA wild Japanese underworld fiction adventure storyThe show of a woman’s strengthA romance which never should’ve happened See how this tale of dark intrigue ends in Spark of Dawn: The Assassin’s Vindication