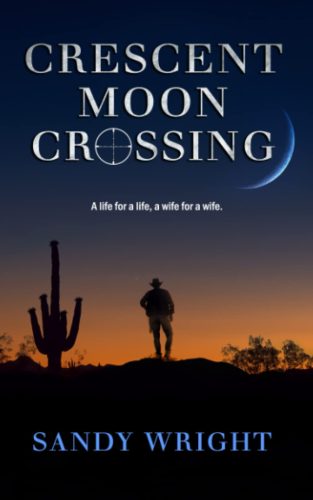 CRESCENT MOON CROSSING is a completed 74,000-word thriller that features a murder that could be ripped from today’s tension-laden border conflict headlines.

He hatches a scheme to make her death look like a Mexican cartel smuggling operation gone wrong. But before he can carry out his plan, she is shot, and he becomes the prime murder suspect.

Rumor Vargas is determined to find her best friend’s killer, even after Sheriff Cooper Jones warns her to keep her amateur nose out of his investigation. She’s a sexy, persistent diversion, one who dredges up memories he’d rather forget of his own murdered wife.

But when his investigation turns to her older brother as a possible suspect, Rumor has reasons beyond their physical attraction to keep Coop close.

The Sheriff suspects Alberto Vargas has Cartel ties, and this looks like the Sinoloan gang’s work.

Following the killer’s clue, “An eye for an eye, a wife for a wife,” Rumor and Coop delve into a single decision in Jace’s past that has resulted in cold-blooded revenge.

Sandy Wright has a degree in Journalism from the University of Missouri-Columbia. CRESCENT MOON CROSSING was a finalist in the Pacific Northwest Writers contest last year. Her previous novel, Song of the Ancients, won 1st place in PNWA as well.