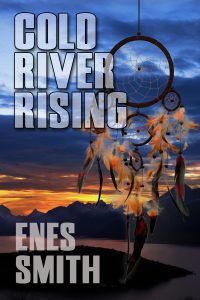 TAKEN MEETS SICARIO. A political action thriller by Enes Smith.
Cold River Rising is a story of Native American college student Tara Red Eagle, a tribal member who is taken hostage with other students on a trip to Peru.
On the Cold River Indian Reservation of Oregon, her grandfather Bluefeathers tries to get help from the U.S.government. When the government refuses, for aversion to an international upset, Bluefeathers makes an impassioned speech to the U.S. Senate and proclaims the Indians are warriors once again. He declares war on the nation of Peru.
Bluefeathers sends an unlikely war party of the new Siyapu (White man) police chief and two tribal police officers, Lori and Hawk, to rescue the students. He closes the borders and calls on other Indian nations in the United States to join them.
In Peru, one of Tara’s friends is killed. Tara becomes distraught because she can’t remember the “old way” and how to dress the body. While the students race to stay alive in a foreign land, Martin, Lori, and Hawk fight battles of their own on their way to find them.
The Cold River Rising novels are stories of a people coming together to survive, of learning to be warriors again.

Buy the book, and follow the author on social media:
Get This Thriller Book From Amazon.

Author Bio:
Enes Smith is a former tribal chief of police for a large Indian reservation. He is a Siyapu, a white man, and has earned the respect of tribal members from many tribes. Cold River Rising, and the Cold River Series has been an Amazon #1 bestseller.
His books have sold over 1 million copies.
Of his first novel, Fatal Flowers (Berkley) renowned crime writer Ann Rule said, “Smith is a cop who’s been there and a writer on his way straight up. Read this on a night when you don’t need sleep, ’cause you won’t.”