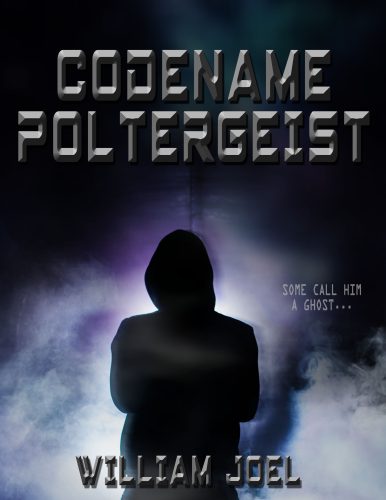 BestMysteryNovels.net
Fans of spy novels and political thrillers might like this entertaining novel that blends in a dash of the paranormal. Codename Poltergeist by William Joel features many familiar thriller tropes – conspiracies on Capitol Hill, CIA, local lawmen at loggerheads, and a hero who finds his world is no longer quite home. This last is quite literal – our hard-boiled hero James Halyard (whose codename is Poltergeist) is from a race of angelic-type beings (possible aliens) who monitor the Earth. After an assassination attempt on his life results in the brutally sudden death of his beloved wife, Halyard is given a new position among his kind. Halyard transforms from a valued secret agent known for being almost invisible, into a supernaturally endowed investigator who can literally vanish. Naturally, this isn’t without cost.
Much of the plot involves the unspooling of the many threads and people working against Poltergeist. He does, however, gain more advantages over his earthly enemies: In striking a bargain with a mysterious being, he gains enhanced abilities like preternaturally sharp hearing and sight, though what he loses in the process becomes clear later in the plot.
Briskly paced, Codename Poltergeist is ambitious in its premise. The writing is delightful and most convincing when the author’s knowledge of law enforcement and the military weaves into the story. We’re hopeful that Codename Poltergeist is the first book in a gripping series.

I am a U.S. Air Force veteran who served at the end of the Vietnam war. The Air Force found that I had a talent for languages, so they sent me to language school. I served as a linguist for a section of military intelligence with a top-secret clearance and then spent several years at the National Security Agency (NSA). I was very interested in police work and later joined a state police. After some time in uniform, I was recruited to be a hostage/crisis negotiator and was trained by FBI hostage negotiators in criminal and abnormal psychology and in the techniques used to “talk down” a hostage taker or someone barricaded with the intent to commit suicide. It turned out that I had a natural talent for it and never lost anyone. I retired after getting an advanced degree in psychology and decided to use my talent to help others who suffer from mental illness and despair. I wrote my first novel in the mid-nineties but found I needed to learn more of how to express my creative imagination eloquently with descriptive and believable character depiction, dialogue, storyline, and background. I love the idea of providing readers with entertainment and an escape into a different realm of their imagination with my writing. I continue to enjoy reading immensely and my favorites are mystery, science fiction, and fantasy. Originally from the East Coast, I transplanted West to Arizona. Maybe someday I’ll return to the East Coast area. I enjoy a close and loving family relationship my wife, my children, grandchildren and my siblings. williamjoel.author@outlook.com