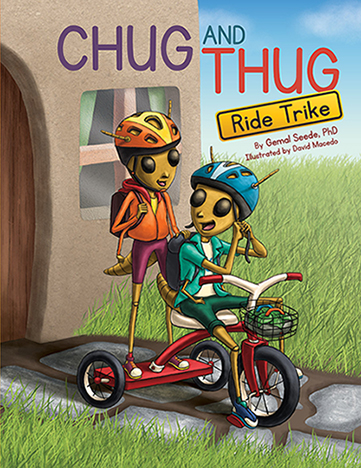 About Chug and Thug Ride Trike:

Chug and Thug were excited when mom let them ride their tricycle to school, but she wanted them to obey two rules: be wise and don’t be tardy. But following the conflicting advice they got along their way to school put them in a bind. Should they be wise, or late for class?

Chug and Thug Ride Trike is a fun adaptation of a 13th-century Arabian fable by Ibn Said al Maghribi. The story encourages children to think for themselves and not give in to peer pressure.

Seede worked extensively for the entertainment and media industry in Los Angeles for several years, including with the Walt Disney Company and Warner Bros. He currently lives in Lasalle Ontario Canada where he oversees Mumin Media Inc. as its president. He holds a Ph.D. and MS in Information Science, an MBA, and a BSc. in Biochemical Engineering.