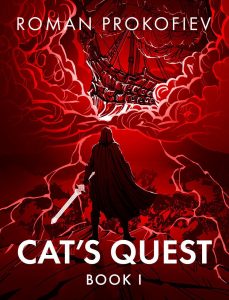 When a cunning merchant called Cat finds a mysterious magic sword, it quickly draws the attention of both the administration and the other players inside the virtual reality of a top-of-the-line full-immersion MMORPG. This discovery sets off a special event and starts a deadly intercontinental war, all arranged by long-gone developers.

Now, Oleg, the man behind Cat, has to collect all the unique weapons left in the game by its creators before the tragic accident claimed their lives and complete the new challenge that nobody on the new developer team has any idea about, all while being accused of cheating and hunted by the most dangerous guild in the game world, led by a dark goddess and one of the top PvP players.

Once, he was a professional player earning real money in another game. He fell from his pedestal into a debt pit: his account got blocked, his savings got burnt, his friends left him behind, and dangerous people appeared at his doorstep, wanting their money back. To get back on his feet, he decided to enter a new game and find a new source of income.

Buy the book, and follow the author on social media:
Get This Fantasy Book From Amazon.
Visit the Author’s Facebook Fan Page.

Author Bio:
Roman Prokofiev was fascinated by the books of great fantasy writers such as J.R.R. Tolkien, Robert Jordan, and Glen Cook. He started jotting down his first fantasy stories in checkered notebooks at the age of fourteen. At that time, his stories were creative reinterpretations of the books he had read in urban fantasy and young adult fiction.
Over the next twenty years, Roman fell in the trap of growing up: he studied, worked, and started a family. Meanwhile, he remained an avid reader of science fiction and fantasy, as well as a gamer, making the LitRPG genre close to his heart. As he compared popular works with his childish attempts, he was encouraged to finally dust off his old tattered notebooks and get back to writing! Some of the worlds and heroes from his childhood did linger on and became the basis for his new fantasy books for new adults.
Roman Prokofiev’s first book immediately attracted the attention of several thousands of readers. Moreover, on most Russian literary sites his books got designated as the top of the genre and were picked by leading publishers.
Prokofiev thinks of himself as a virtual fantasy writer. In his own words, “I know the world of modern gamers and the nuances of MMOs perfectly, but the main thing in my works is the plot and adventures of the characters. I consider my main achievement to be the creation of Sphere of Worlds, a grandiose virtual multiverse, populated by bright, unusual characters. Such as the ingenious merchant Cat, the naive alchemist girl Weldy, the cold-blooded hunter Ace…”
This fantastic universe managed to conquer the hearts and minds of thousands of readers…and now it has come to you.