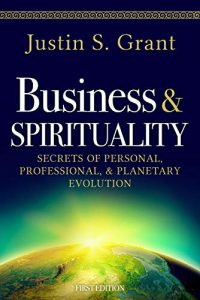 Inspirational books may provide effective motivation, but often “preach to the choir”. In our multicultural and scientific age, and with the rise and dominance of multi-national corporations, more innovative and inclusive approaches are essential to address the enormity of the issues faced by humanity. To answer this need, Business & Spirituality “preaches to the workplace”, employing an omni-denominational voice. It speaks to a wide audience: thought leaders, knowledge workers, entrepreneurs, executives, creatives, engineers, staff members, volunteers, and homemakers can all gain new insights for synchronizing personal evolution with professional development, the advancement of groups, and the up-liftment of our world.

Buy the book, and follow the author on social media:
Get This Non Fiction Book From Amazon.

Author Bio:
Justin S. Grant was born and raised in Santa Barbara, California. His first love was computers, and from a young age, this enthusiasm led him into the business of technology consulting. He attended Thacher School in Ojai, California, where he received a vigorous natural, ethical, and academic education in an atmosphere rich in metaphysical traditions. At the University of California, Santa Barbara, he earned a Bachelor of Arts in Creative Writing from the College of Creative Studies. During those years, he developed his love of singing, participated in choirs, and studied world religions, individually and in devotional groups. After relocating to Los Angeles, Justin developed a successful IT consultancy business. Because technology is like the nervous system of our contemporary world, tech consulting for many types of organizations gave him broad, behind-the-scenes, experience of the commercial arena. Over a twenty-year period, his firm serviced scores of companies, hundreds of people, and thousands of devices. Clients, large and small, remarked that his company, Sunrise Computers, was “the best vendor they ever had”. He has been active in two celebrated barbershop choruses. Masters of Harmony won two gold medals in international competitions during his years of participation, and Westminster Chorus, a pioneering young-men’s group, won three gold medals, as well as the Choir of the World Pavarotti Trophy. He served as treasurer and technology director for five years with Westminster. He earned a degree in Audio Engineering from Musician’s Institute, Hollywood, and founded Lion Studios, a recording studio and record label. Justin co-produced an EP album and performed as a vocalist in a pop duo. He was a choir vocalist, lead harmonium player, live audio engineer, and technology director for a large temple in Santa Monica, California. Justin received a Master of Arts degree in Transformational Psychology from the University of Philosophical Research in Los Angeles. He recently sold his IT business and completed his first book entitled: Business & Spirituality ~ Secrets of Personal, Professional, & Planetary Evolution.