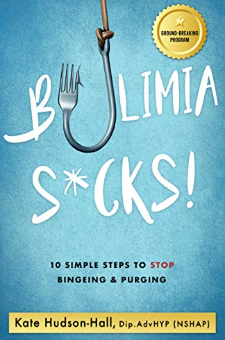 About BULIMIA SUCKS!: 10 SIMPLE STEPS TO STOP BINGEING AND PURGING by KATE HUDSON-HALL:

Do you feel broken and confused because you binge on food?

If YES is your answer, fantastic, then Bulimia Sucks! is exactly what you’ve been looking for. In this eating disorders book, Kate will show you the same way she helps her clients begin their recovery with the Bulimia Sucks! Program. Because you can fully recover from bulimia.

Personally suffering 15 years of horrific bulimic and anorexic experiences you’re going through, and now 25 years entirely free from anorexia and bulimia. Thanks to various therapist’s help, Kate decided that she would like to help others.

So, 21 years ago, she trained as a psychotherapist, hypnotherapist, and NLP practitioner. Kate then continued to train in many other therapy areas, one being an eating disorder therapist. Helping clients overcome their bulimia completely, and this is what she’ll be teaching you.

In Bulimia Sucks! You will learn astounding new approaches and discover how to:

· Begin to stop bingeing & making yourself sick, abusing laxatives, diuretics & compulsive exercising by understanding your food restriction is the cause of your crazy binge cravings.

· Improve your negative body image & reach and maintain your ideal weight without starvation.

· Stay motivated to recover at your own pace.

She says, “I’m eating three meals a day (!!!!) with snacks between. I’m not taking any substances and only having the occasional glass of wine. The bulimia is fading away and only appears its ugly head when I am anxious, which is rare.”

If the answer is yes? Read this book NOW… Bulimia Sucks! will give you the empowering techniques to begin to unlock your secrets to bulimia freedom.

Author Bio:
Kate Hudson-Hall is a psychotherapist, podcaster and author of Bulimia Sucks! The Bulimia Sucks! Personal Workbook and Food Journal. At the age of 18, she began her bulimic career in earnest! Fifteen years later and after much help. She eventually freed herself from the clutches of anorexia and bulimia. She then stepped out and decided to take a different bulimic pathway. Feeling the great need to help others as she had been helped. She has spent the last two decades working as a psychotherapist, hypnotherapist, NLP (Neuro-Linguistic Program) and EFT (Emotional Freedom Technique) practitioner.