You are here: Home / Mystery Books / Blood on Their Hands 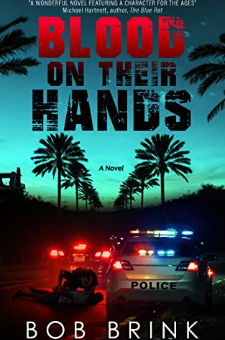 About Blood on Their Hands:

Hiram Garbuncle is a veteran criminal defense attorney – as well as a racist, miserly alcoholic. His life revolves around hoarding money, following sports, pursuing sex, drinking – and the prideful practice of law.

Alec Monceau is a black man working to support his daughter’s family in Trinidad. It is 2008, and his car carries an Obama bumper sticker. This political advertisement leads to a superfluous traffic stop and a brutal beating by police.

It goes against Garbuncle’s grain to defend a black man from a charge of violently resisting arrest, but he is so confident of winning that he is negligent in the jury selection, and a mistrial occurs. He then discovers incriminating evidence on the two cops, and his new challenge becomes how to keep himself and his client alive pending a new trial.

Blood on Their Hands borrows themes from the movies Gran Torino and My Cousin Vinnie. It is a tale replete with both pathos and humor. Steeped in suspense, action, intrigue, violent episodes and yes, a bit of titillating sex, the story is leavened by a tragic love affair. Humorous scenes are abundant, providing comic relief. Perhaps above all, Blood is a story of redemption.

Bob (Robert) Brink was born on the shores of Lake Michigan in Muskegon, Mich., and was so precocious that he soon learned to walk on water (subject of his next novel, a fantasy — kidding, kidding). He relocated with his parents at age 6 to their home state of Iowa, growing up around Des Moines and moving to a small farm at age 14, where he learned to pick corn, considerably less exciting than an aquatic ambulatory adventure. After a torturous coming-of-age, he embarked on a newspaper career that took him to Joliet, Ill., Chicago, Milwaukee, Tampa and West Palm Beach, in which vicinity he has lived for a number of years. He garnered several writing awards, and the magazine where he was copy chief and feature writer won an award for Best Written Magazine in Florida. In early middle age, Brink learned to play clarinet and tenor saxophone, and performed many years in a symphonic winds band while also doing a few big band gigs. He learned ballroom dancing and is a health enthusiast, blogging on alternative health care along with grammar, socio-politics, and his and others’ authorial activities. While doing freelance writing and editing, he became an author, ghost-writing a book, turning out a book of short stories, and completing three novels. The latest, BLOOD ON THEIR HANDS, is a legal thriller about a racist, miserly attorney pressured into defending a black man from a false police charge of resisting arrest. After discovering incriminating information about the officers, his main challenge becomes keeping himself and his client alive. Brink was able to terminate his contract with traditional publisher TouchPoint Press, and published a Second Edition, including a new cover, with Amazon KDP. Brink’s previous novel, MURDER IN PALM BEACH: THE HOMICIDE THAT NEVER DIED, achieved best seller status with Amazon Kindle in its Second Edition. It is a roman à clef about a real, highly sensational murder that occurred in 1976. In early 2020, the six children of the victim reversed themselves and petitioned the governor of Florida for a full pardon for the karate expert who spent 15 years in prison, convinced he was innocent.