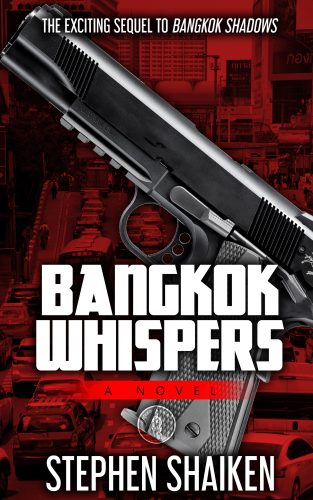 Some people just can’t avoid danger. Lately, American expat lawyer Glenn Murray Cohen has been one of them. A year ago, Glenn and his close friends from Bangkok’s mysterious NJA Club were drawn into a CIA plot to kidnap a Russian gangster. They succeeded and survived, thinking life was back to normal. When a sleazy grifter from Glenn’s past appears in Bangkok, Glenn and the NJA gang are dragged back into a dangerous world, this one filled with drug dealers, spies, and North Korean hitmen. Follow Glenn and his colorful friends as they face bullets, deceit, and love. Suspense with a touch of humor will keep you turning the pages of this latest exotic noir thriller by a master of the genre.

Stephen Shaiken practiced criminal law in for more than thirty-five years, the first four in Brooklyn, and the rest in San Francisco. He is a graduate of Queens College and Brooklyn Law School, and earned an MA in Creative Writing from San Francisco State University before starting his legal studies. He currently splits his time between Bangkok, Thailand, and Tampa, Florida.

Stephen will soon be releasing Queensborough Rock, a different kind of novel, set in New York City in the late sixties era, against the backdrop of a young rock and roll manager struggling to break from the second-tier Queens rock scene into the glamor and stardom of Manhattan. The novel was very loosely inspired by Stephen’s brief career as a rock manager in 1970-71.

When he isn’t writing, Stephen enjoys travel, gardening, yoga, guitar, and following politics and current events with a passion. He’s a voracious reader of fiction and non fiction in too many genres and subjects to list.