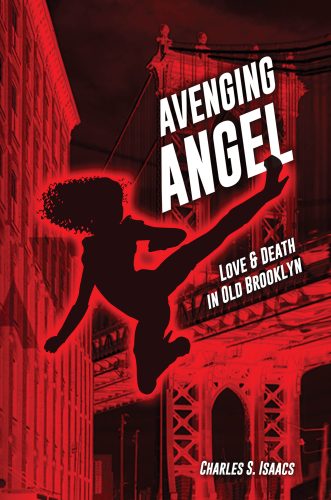 About AVENGING ANGEL: Love and Death in Old Brooklyn by Charles S. Isaacs:

A riveting tale of revenge, survival and redemption, wrapped around an unlikely love story and set against an urban backdrop corrupted by violence against women and racism.

Her campaign continues with solitary walks through dark city streets, hoping to be assaulted by men with bad intentions. Those entrapped by her spider’s web pay dearly for their efforts.

Surrounded by white men one night, she’s rescued by Mike Borelli, an Italian-American passerby. A stormy up-and-down relationship ensues. Ultimately, as her rage matures into purposeful action, and as he begins to see the world through her eyes, they become a team.

Along the way, they encounter serial killers, wife-beaters, actual and would-be rapists, gangsters, crooked cops, a kidnapper and a pedophile priest, as well as numerous women in desperate need of their help. Beneath all the action, though, is the blossoming of a most unusual love story.

Charles S. Isaacs has been a schoolteacher, a college professor, a community organizer, a Congressional consultant, a social activist, a gambler and an occasional journalist. He has written opinion columns and feature stories for numerous newspapers and magazines. During recent decades, he has been a consultant to dozens of non-profit organizations operating in the social justice arena. His published work includes fiction, poetry and award-winning non-fiction.