You are here: Home / Featured Books / Ariadne by Daniel Agnew 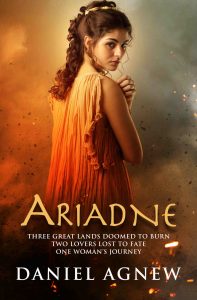 About Ariadne by Daniel Agnew

A young priestess flees from Crete to Egypt and finally Canaan as the Bronze Age world collapses around her.

Until the skies grew dark and red and the ground shook and cracked, Ariadne’s biggest problems were how to stay one step ahead of her parents and out-think any boys who might come her way. Now she’s part of a desperate plan to bring the world back to balance and save Crete from destruction.

Shame for the world Ariadne had other plans.

Hardened by her trials and forced to leave behind those she cares for, Ariadne struggles on to survive in new lands with new friends. But these lands are just as unforgiving as the one she left, and just as haunted by ghosts from her past…

Author Bio:
Daniel Agnew is a writer, historian, swordsman and classics graduate from the Australian National University. He has a passion for reviving so-called dead languages, everything from Ancient Greek and Latin to Irish and Scottish Gaelic. His interest in medieval longsword masters has served him well both on the battlefield and on his weekly blog.