You are here: Home / Featured Books / An Amazing Thing Happened on the Way to the Future 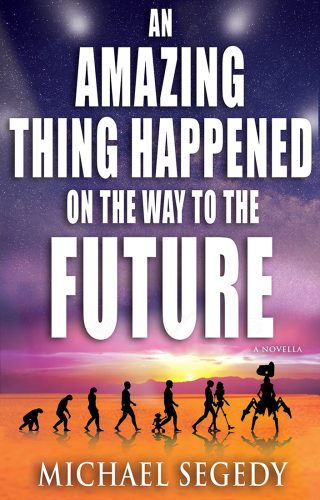 About An Amazing Thing Happened on the Way to the Future:

In this darkly humorous and philosophically engaging sci-fi novel, a wayward young woman and her straightlaced companion awake from 200 years of “suspended life” to a future that challenges many ideas about what it means to be and to remain human. The technological changes that have transpired during their long sleep rattle them, but even more mind-boggling are the startling views they must grapple with regarding human evolution.

Although they do not know it, the two young visitors from the past have a significant role to play in humankind’s unfolding drama. The citizens of this post-apocalyptic world hope to discover from their time travelers some clue that might explain humanity’s downward slide towards oblivion.

And if this small survival colony fails to come up with a rescue plan, there is still Ike, an extraordinarily creative AI who has an existential trick up its sleeve to save the human footprint. But Ike’s remedy might not be the sort of salvation most of us would readily embrace. Though as he sees it, “desperate times require desperate measures.” And with the hands of Doomsday’s clock perched just nanoseconds before midnight, the times could not be more so.

Michael is an award winning Indie author whose writing has been inspired by living overseas in such faraway places as Peru, Morocco, Israel, and Taiwan. Apart from writing a dozen novels, including thrillers, young adult, and science fiction, he has published numerous academic articles about literature and writing, and in 1985, Gwendolyn Brooks, poet laureate of Illinois, presented him with Virginia English Bulletin’s first place writing award.