You are here: Home / New Books / A Taste of Korea: Korean Cooking Made Easy with Authentic Korean Recipes (Best Recipes from Around the World) 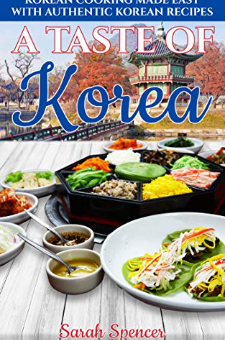 About A Taste of Korea: Korean Cooking Made Easy with Authentic Korean Recipes (Best Recipes from Around the World):

Bring the flavors of Korea to your table with this collection of authentic Korean recipes from breakfast to desserts!

Koreans are known worldwide for their obsession with kimchi (their famous fermented cabbage) as well as their grilled meats and barbecue recipes; however, the real world of Korean cooking is much more diverse and flavorful. From fermenting and grilling to braising, frying, drying, stewing and parboiling, Korean cuisine never fails to delight and bring a smile to your face. Served at temperatures from bubbling hot to freezing cold, Korean foods are always nutritionally well-balanced and always a delicious way to mesmerize your taste buds.

Korean cuisine has been strongly influenced by the country’s ancient history, climate of bitterly cold winters and hot, humid summers, and peninsular geography. But while Koreans are justifiably proud of their traditional food, it’s not entirely homegrown. China had a strong influence, as did Japan, which occupied Korea between 1910 and 1945, and there are even a few European elements. For example, Portuguese traders introduced chili peppers to Korea in the 17th century, and by the 18th century they were popular across the country.

This illustrated cookbook captures the cuisines from different parts of Korea to provide you with a handpicked collection of authentic Korean recipes. After reading this Korean cookbook, you will know how to cook a Korean meals in no time and everything about the Korean food culture, the cooking methods, and the ingredients needed to cook Korean foods.

Inside this illustrated cookbook, you’ll find 85 recipes including:

All recipes come with a detailed list of ingredients, cooking and preparation times, number of servings, easy to follow step-by-step instructions and images, as well as nutritional information. .

Let’s get started! Scroll back up and click the BUY NOW button at the top right side of this page for an immediate download!

Sarah Spencer, who lives in Canada with her husband and two children, describes herself as an avid foodie who prefers watching the Food Network over a hockey game or NCIS! She is a passionate cook who dedicates all her time between creating new recipes, writing cookbooks, and her family, though not necessarily in that order!