You are here: Home / Featured Books / A June Wedding by Lorhainne Eckhart 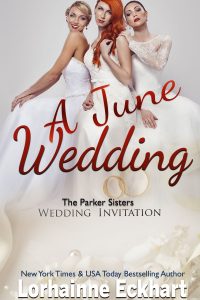 About A June Wedding by Lorhainne Eckhart

Dearly beloved, we are gathered in this month of June for a wedding at the Parker family ranch. Or so the invitation says! Little does the family know that not just one Parker sister is getting married, but three.

After several failed attempts at their on-again, off-again romance, Justin and Mason face a contract that could end their relationship for good. Meanwhile, Naomi and Cameron’s need to overcome more than a few hurdles, including the question of whether her father will ever accept a man who has wealth and position but never his approval. Finally, there’s Scarlett and retired racecar driver Emmett, a single father with a son who’s determined to see that Scarlett and his father never say “I do.”

Will this be the wedding of the season, or will three sisters end up with broken hearts?

Author Bio:
With flawed strong characters, characters you can relate to, New York Times & USA Today Bestselling Author Lorhainne Eckhart writes the kind of books she wants to read. She is frequently a Top 100 bestselling author in multiple genres, and her second book ever published, The Forgotten Child, is no exception. With close to 900 reviews on Amazon, translated into German and French, this book was such a hit that the long running Friessen Family series was born. Now with over sixty titles and multiple series under her belt her big family romance series are loved by fans worldwide. A recipient of the 2013, 2015 and 2016 Readers’ Favorite Award for Suspense and Romance, Lorhainne lives on the sunny west-coast Gulf Island of Salt Spring Island, is the mother of three, her oldest has autism and she is an advocate for never giving up on your dreams.