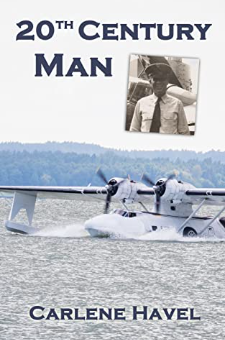 As a young man, Carl boasted that he planned to live to be one hundred years old, make a million dollars, and travel around the world. By what he would have called the width of a frog hair, he narrowly missed fulfilling all three dreams as he marched through the passing parade of the twentieth century.
The Loch Ness Monster, military weapons systems, political scandals, sports events, computer technology–nothing was off limits during our Saturday afternoons. Since all traveling was done within the confines of his tiny living room, neither time nor space nor reality itself presented any barrier. He was always ready to talk about anything that happened to catch the interest of his agile mind.
Mostly, he told me about his extraordinary life. So, now I’ll tell you.

Carlene Havel writes Christian-themed romances and historical novels. She has lived in Turkey, Republic of the Philippines, and numerous US states. After a career in human resources and software development, she began writing in 2005. The Havels live in Texas, surrounded by their extended family.